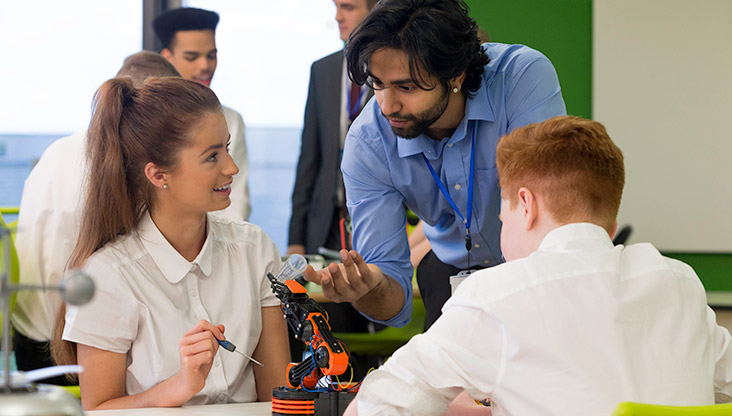 Shamaela Rawshan Raima is hunched over a pair of test tubes, eagerly waiting for the colour of their contents to transform. Shamaela, who loves literature, wouldn’t have imagined enjoying herself in a chemistry lab a year back. But now things are different.

Shamaela and nine others are the first to take the International Baccalaureate (IB) Diploma Programme from the Aga Khan School, Dhaka. The move is part of a process across the Aga Khan Education Services (AKES) to embrace a curriculum that demands more of students rather than simply absorbing knowledge; curriculum that encourages students to think critically and challenge assumptions.
In addition to being academically rigorous, IB aims to nurture students who are caring, motivated, and able to learn independently. Shamaela admits her IB examinations often don’t test her recall of facts to the same extent that her previous examinations did. “We weren’t asked what this character did at this point in time,” she says. “We were asked more abstract concepts, like how do you think the writer used language to portray a certain emotion?”
When the Aga Khan schools began in the early 1900s to educate children in remote rural areas in South Asia, they were progressive for their times, stressing the importance for both boys and girls education. Since then schools, like the one in Dhaka, have strived to give students the highest quality education available and equip them to transition to university and productive work.
In Kampala, Uganda, Bereket Zelealem from the Aga Khan School scored straight As in the Cambridge International Examinations (CIE) with ten subjects, while students generally only take 8. Starting from a foundation of core subjects, CIE encourages learners to engage with a variety of subjects while making connections between them. “In the curriculum, I had fun exploring all kinds of subjects even though I knew very well that I truly cared about math and science. Among other subjects, I made sure I studied Physics, Chemistry and Biology which I really did enjoy learning.”
Bekeret’s results won him scholarships at MIT, Cornell and the University of Pennsylvania.
Similarly in Pakistan, Aga Khan University (AKU) has created its own examination board and developed exams that are rigorous, focusing on conceptual learning and the application of knowledge in real world situations.
Mariam Sajjad, a student at Aga Khan Higher Secondary School, Karachi, says AKU-EB has made her see learning “not only as words printed in a textbook, but as concepts to be questioned and understood.”
Like IB, AKU-EB encourages students to learn independently. “We were given assignments on various topics,” says Mariam. “Researching through multiple reference books and websites, then presenting your results in front of the class, helped enrich my knowledge and clarify concepts so that I can apply them in day-to-day life.”
Twenty-one out of 51 AKES, Pakistan high schools are now affiliated with AKU-EB. The aim is for all secondary schools to eventually become affiliated, including those in the remote mountainous areas of the northern regions.
Meanwhile in India, AKES is looking to affiliate with more challenging national examination boards. To prepare for this transition, AKES has engaged consultants to deliver contemporary skills training to teachers in areas of conceptual clarity, problem solving, critical reasoning, scientific inquiry, robotics and English language communication.
Besides being competent and able to effectively cope with tertiary education, a solid high school education should aim to produce future leaders. As such, Aga Khan Education Services is focused on raising standards in education by regularly assessing its curriculum to ensure learning is competitive, relevant, and holistic in preparing young leaders for real-world challenges. Building strong affiliations with renown international and national examination boards is one important way of ensuring Aga Khan students are engaged in rigourous learning practices to best prepare them for further academic and professional careers.
It is the brief moment when the blue hue appears in Shamaela’s test tubes that she reflects on her journey throughout her education. As a literature student who now appreciates the sciences, Shamaela recognizes that there is time during these formative years in her education to explore, to be inquisitive, and to be challenged by new ideas. Wherever she decides to take her education, Shamaela is confident that the skills learned at AKES will equip her to be a successful leader of her own future.
What's new