"The Aga Khan Education Services, a philanthropic agency, will draw on its own extensive experience in many parts of the world to offer broad, holistic, early childhood education on a secular and non-denominational basis at the highest standards of excellence. The objective is to have a curriculum of proven calibre, taught by competent teachers, to help lay strong foundations for a child's continuing educational growth."

His Highness the Aga Khan
The Ismaili Centre Dubai, 2003

The staff and educators at the Aga Khan School Osh strive to create a positive and productive environment that enables pupils to balance academic demands, sporting activities and cultural events as well as community life.

AKSO challenges pupils to be intellectually inquisitive and socially conscious. Located in the Kyrgyz Republic’s capital, Osh City, as a first private school AKSO was established in September 2002. Construction of this purpose-built facility began in 2000, which commemorated Osh City's 3000th year anniversary.

AKSO offers students and parents with high-quality education and committed teaching staff lasting over 15 years. Collaboration with the Aga Khan Education Boards in the UK, USA and Canada, as well as Aga Khan Youth and Sports Board in Canada enables for sharing of diverse and enriching experiences between teachers. In order to develop student’s interest and skills in the sciences, AKSO established STEM focused clubs such as Robotics, Makers’ Space and Coding with the support from the National Councils of the USA and Canada. The focus in the near future will be on expanding the number of STEM clubs, and building the capacity of the teachers while institutionalising the clubs within AKSO.

Development and implementation of a upgraded English Language Curriculum aligned with Common European Framework for Reference along with Science and Math curriculum upgrading initiatives enable AKS teachers to enrich national curriculum taught in the school with a vision for AKS Osh to become a Science Technology, Engineering and Math (STEM) specialized school in the future. Professional development opportunities provided to these teachers within these initiatives are aimed to strengthening their knowledge and pedagogical skills to diversify their classroom practices and maximize opportunities for students to explore, analyze, reflect and learn.

AKSO aims to support students to become confident leaders with high intellectual abilities so they may contribute their knowledge to the development of their country. Annually, over 95% of the school graduates enter prestigious higher education institutions and universities in Kyrgyz Republic, Central Asian countries, Russia, USA, Eastern and Western Europe and China.

Several scholarships and needs-based discounts are presented to students from different districts of Osh Oblast to pursue a high-quality education at AKSO annually.

AKSO also provides learning support to the students at government schools. Over the last 5 years, AKSO has implemented learning support programmes in 22 schools in Naryn Oblast to upgrade student’s knowledge in English, Math and IT. In total, over 2500 children from government schools benefited from this initiative in Naryn Oblast during the last five years. 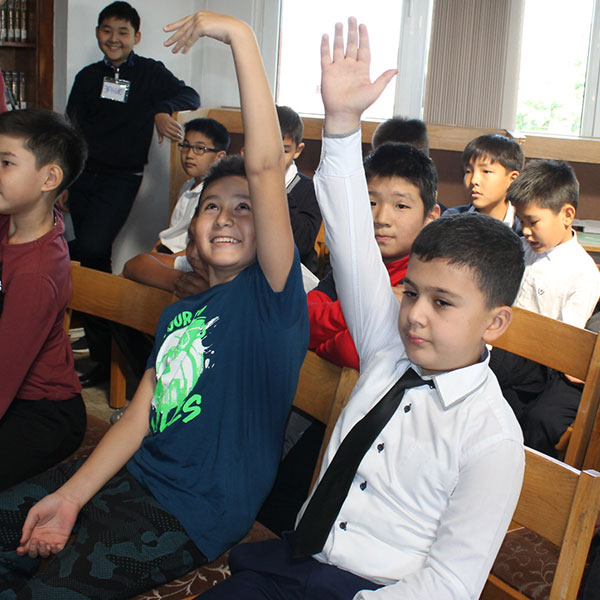 The Aga Khan School, Osh is located in the Kyrgyz Republic and was established in September 2002.

Construction of this purpose-built facility began in 2000, in the year that commemorated Osh City's 3000th year anniversary.

On October 30, 2002, the Governor of Osh Oblast, Naken Kasiev, inaugurated the School in the presence of His Highness the Aga Khan.

Aga Khan Education Services (AKES) has a long tradition of leadership in educational development. The foundations of the present system were laid by Sir Sultan Mahomed Shah, Aga Khan III, under whose guidance over 200 schools were established during the first half of the 20th century, the first of them in 1905 in Zanzibar, Gwadar in Pakistan and Mundra in India. Since the creation of Aga Khan Education Service companies in the 1970s, the schools have been centrally administered and managed.

The Aga Khan school in Osh, part of the Aga Khan Education Service (AKES), currently provides over 500 students with quality learning experiences in an environment which values diversity and responds creatively to the educational needs of children.

Since the first graduating class in 2007, all graduates have advanced to further education at local and international universities. This is a significant achievement of the Aga Khan School, Osh.

Since 2008, German as a second language has been integrated into the curriculum through the partnership between AKES, Kyrgyz Republic and the German Embassy in Bishkek. The German Embassy offered to provide German language subject teachers, professional development training and support for the preparation of students to pass DSD exams. The partnership with the German Embassy has given opportunities for our graduates to be admitted to German Universities and colleges, as well as employment following the completion of their undergraduate degrees in Germany.

From 2010 to 2014, AKS also organized the French Language & Culture Club as an afterschool enrichment activity with the support of the French Embassy. Trainers from the Osh State University were invited to facilitate the French language club for our students, which was quite popular. Since, 2012, the Aga Khan School, Osh has introduced an initiative to nurture a love of science, scientific research and its application among young people.

The AKES schools strive to create a harmonious balance between academic demands, sporting and cultural activities and community life. It challenges its pupils to be intellectually inquisitive and socially conscious. The School believes that while what students know is important, the true measure of a student's education is the ability to analyse what they do not know.

Accordingly, The Aga Khan School, Osh applies a balanced child–centered approach within the field of child development that allows students to make their own choices and establish their own ideas towards promoting competent communication and learning skills. In addition, the approach focuses on the concept of independent learning, giving students the opportunity and ability to apply their own understanding and make their own judgements based on the subject knowledge and experiences they have mastered. Developing critical thinking and analysis is at the core of the School's mission. Teaching staff encourages students to explore their interests, ask their own questions and learn to prove their hypothesis on the inquired problems. This focuses on developing students’ unique sense of creativity not just through artistic expression, but in how they learn new concepts and solve problems.

The technique dictates that teachers, instead of telling the child exactly what they have to do, should observe and facilitate through guiding questions, giving the pupil the space to learn and grow in his or her own way.

For the past decade, the Aga Khan School has become an integral part of the Osh City community, offering innovative education approaches to both students and teachers. The School encourages students to master multiple languages, promotes the use of communication and information technology, as well as nurture the love of sciences by conducting annual science fairs. It challenges the students to be intellectually inquisitive and socially conscious, preparing them to become confident leaders so they may contribute their knowledge to the development of their country.

The School also encourages students to respect and appreciate other peoples’ cultures, social structures, values and beliefs. Taken together, these objectives are designed to help equip children with the tools they will need to make their way in school, society and an increasingly interdependent world. 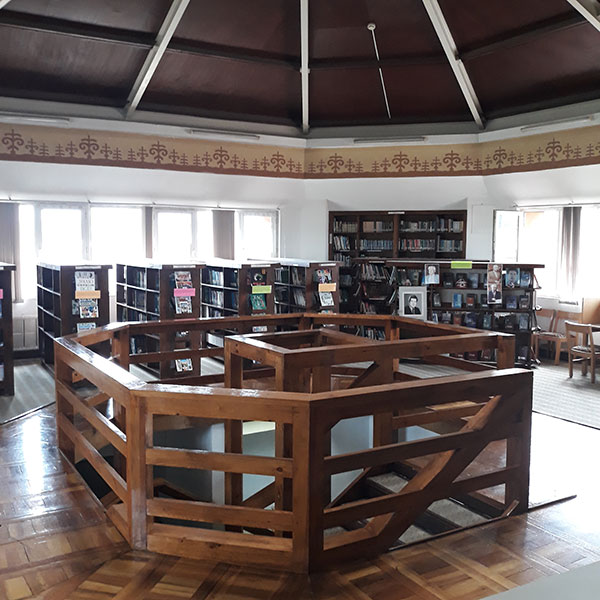 The core principles that guide us in this pursuit are:

Every year, The Aga Khan School, Osh offers quality education to 500+ students from grades 5 to 11. New students entering Grade 5 are allocated into one of two main languages of instruction, based on the admissions performance and preference: Russian or English.

Generally, each of the two mediums of instruction has different second language subject options, as follows: 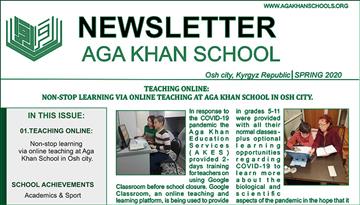 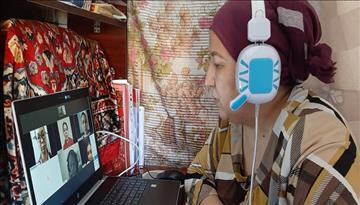 18 May 2020
Teaching amid the COVID-19 pandemic
2020 has brought drastic changes to the education system not only in Kyrgyzstan, but in schools all over the world
[ Read article ] 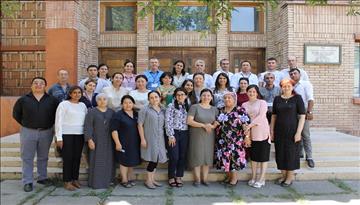