The IB and IGCSE curriculums enable students to learn using an inter-disciplinary approach and to develop critical thinking, creativity and international-mindedness—identified by leading educators globally as some of the critical skills for the 21st Century.

The School attained a pass rate of 88% in the IB results, with students attaining points of 30 and above.

47 students sat for the 2016 June Examinations.

38 students attained 5A* - C, giving the School a pass rate of 81%. All students’ attained grades that can enable them get enrolled to IBDP or A-levels.

Our top student attained 7A*s and 3As, and the second best attained 4A*s and 5 As. In total, 13 students attained 6As and above. 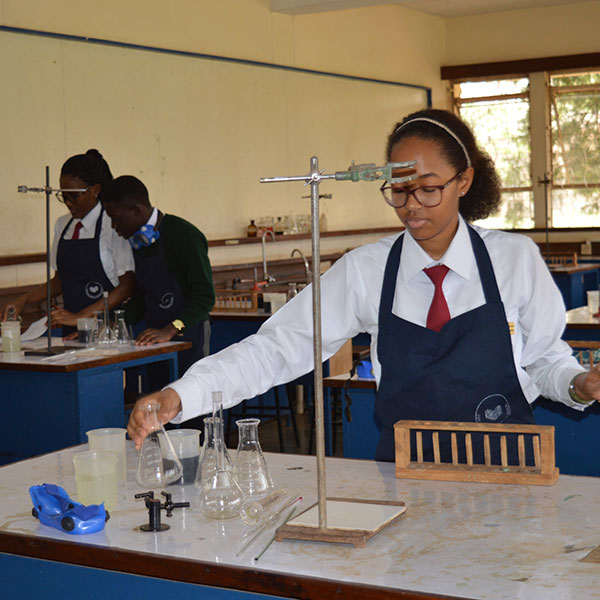 The secondary curriculum (O and A levels) enables students to learn using an inter-disciplinary approach and to develop critical thinking, creativity and international-mindedness. Students obtain academic results that enable them to proceed to the next level of education; Senior 4 candidates move on to A level and Senior 6 candidates join tertiary institutions of their choice.

The School has a very strong debate team that participates in the EAMUN (East African Model United Nations), Uganda MUN and runs its own Aga Khan MUN every year. The debate team also triumphed at the World Scholars Cup (WSC) Debate Showcase held in Bangkok, Thailand in June 2016.

The School boasts of a very vibrant community service programme, in which the students have been involved in projects at Sophia Nursery school in Wakiso district and planning of trees in Eastern and Western Uganda during educational field trips.

Students have also done individual projects such as designing websites and blogs for animal awareness campaigns, setting up care projects for orphans and children hospitals.

We are also the first SUSO (Stand Up Shout Out) School in Uganda and the Aga Khan SUSO division has been involved in raising awareness of social and health issues affecting the youth through several sports related events.

The Aga Khan schools participate in the ISSAK (International Schools Sports Association of Kampala) as a single school, National and International sections.

In the International Schools Football league, 2015, the School won the U20 boys category.

In 2016 the School won the Independence Day swimming gala organised by the Uganda Swimming Federation and was second place in the ISSAK (International Schools Sports Association of Kampala) swimming gala.

In Badminton, our players qualified for the semi-finals in the East African Badminton Challenge.

The School has students who represent the national swim teams and who have participated in competitions held in Kenya, Mauritius and Angola.